Alarm Delays Due to Android OS is my guess

Many Alarm Delays most likely due to Android OS issues. At least that is my guess.
Both Android 7 and Android 8, both Samsung Galaxy S8+ and S9+ show the following symptoms: Massive Time Delay for Alarm Notifications and also Google Play Store is massively slow at updating apps even though the download is fast and 100% downloaded and then forever to install app updates. Apps I have noticed many hours time delays for their notifications: Caynax Alarm Clock Pro, Talking Alarm Clock Pro, Xfinity Home Security.
I have Battery Optimization Turned OFF. I have set Urgent Notifications settings. Hours can go by before alarm event registers. Study attached screenshot for clock time vs alarm Notification time. The Alarm was set for 8:40 AM. The alarm went off (notified me) for the first time at 10:34 AM.

Hi.
Looks like heavy battery optimization. Although for alarm clock that uses standard “Set Alarm” Android method there shouldn’t be any problems. But… this is not the first time Samsung does something differently/wrong :/.
You mentioned second alarm clock app so I guess I might be right.
I get mails from latest Note device users reporting similar problems with “Chime” app.
Could you please check whether there isn’t any new more hidden battery optimization setting?

Inside app “About app” section there is option to turn on logging inside application. When it happens again you can get back to that section and send mail using “Contact” section.

[https://www.youtube.com/watch?v=a7ZE65FMDlI](http://Video Showing Settings)
I made this long video showing various system settings. I think Caynax needs to upgrade software to utilize all these settings. At least, that is what I see from the Stock Alarm Clock app on the phone that always works.
Thank you for your help.

The Alarms will not notify me if the phone is not actively being used when the alarm event is supposed to be triggered. If alarm event is 7 am, and I am not using the phone at 7am, it won’t go off. Later in the day, after using the phone a dozen times, hours later, the alarm event notifies me. I have followed all the recommendations from Caynax and I appreciate their feedback. The problems persist. I believe their software is deficient for Samsung Galaxy S8 and S9 using Android 7 and Android 8. It may be multiple settings, Battery Optimization, Battery Saver, Applications That Can Appear On Top, Do Not Disturb Permission, Apps That Can Change System Settings, Allow App While Date Saver On.
I have found three apps behave this way: Caynax Alarm Clock Pro, Talking Alarm Clock Pro, and XFinity Home Security (Home.) The stock CLOCK app that comes with my phone will alarm on time. My life is lived with Dementia. I desperately need many alarms ON TIME to help manage my day.
Please watch the video, above, to see the setting on my phone.

Wow. Many thanks for such feedback.
I see that Samsung must have changed something lately as on older devices I managed to detect some device manufacturer battery settings. 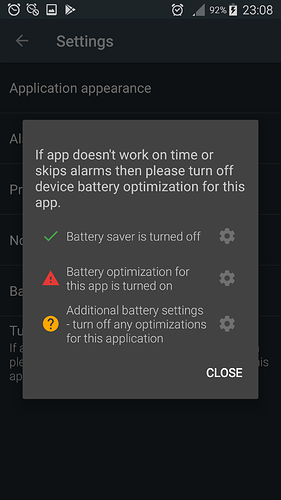 App does need to draw anything over other apps. Example of such app is the one you used to record video - it shows “recording buttons” over other apps. It also does not need access to notifications area or access Internet when it’s not being used. It also does not modify system settings.
What caught mine attention is do not Disturb mode. I don’t remember what device it was from but I’ve seen crash reports about app not allowed to change Do Not Disturb mode. Maybe you could try adding app there.

Ps. I see that your stock alarm clock speaks time? You can mail me at caynax@gmail.com for PRO version of Hourly Chime app that can speak (more fluently) any text you enter. Although since alarm clock app has problems with running on time chime app will have them too.

Do Not Disturb mode

This mode and Apps That Can Appear On Top cannot be used by apps not programmed to use them; the app needs to be written to avail itself to these settings. I only thought the Apps That Can Appear On Top was important because the apps that DO work spot-on-time have these settings.
My stock Clock app works flawlessly. Google Hangouts let’s me know immediately about messages. And a dozen other apps “wake up the phone” and alert me on time.

I have all battery optimization turned OFF.
I have the entire phone set to use the battery to its fullest (wasteful.)
Neither of these (by themselves) cause the Caynax Alarm Clock Pro to announce itself on time.
And neither of these affect my other apps that do alert on-time.
My phone is always turned on and I restart it every couple days.

Thank you for the offer for the Hourly Chime app. I will try it, but like you said, same programming methods may have the same lack of on-time-alert ability.